SAVE THE ROYAL
BROMPTON HOSPITAL

Two petitions are currently available online to sign and add your voice to
stop the closure of The Royal Brompton Hospital:
The takeover of Royal Brompton Hospital's specialist respiratory and cardiac services for children and adults has been met with “Alarm & Sadness" and deemed "the end of Royal Brompton Hospital, which is not at all welcome".
I would like the MP Greg Hands who is the MP for the hospital to speak up against this move
He will be seeing Matt Hancock regularly and we need him to take up this campaign
Several Councillors – Cllr Freeman and Cllr Josh Rendall have also taken up this campaign and the Council do not want to lose this hospital and although they could reject the change in planning permission – to get more flats, if this is being funded by Government then they may well be over ruled

Thanks again – please do all you can, but the Council certainly don’t want to lose the hospital so we need to work with them but get the Government to take notice of us as locals

Thank you.
Victoria
Victoria Borwick – Elected Patient Governor at Royal Brompton
Please do not hesitate to contact me if you have any other questions, and please do keep me informed of any developments.

Best wishes,
Felicity
Felicity Buchan MP
Member of Parliament for Kensington
Having research and practice all on one campus – the Fulham Road makes this a vibrant and interesting place to work and is of great benefit to our Borough and London as a whole.

I know that your local Councillors and other residents feel very strongly about this matter and we need them all to raise their voices directly to Parliament, so that our MPs and the Secretary of State for Health understands that he should not ride over the views of residents and effectively destroy this specialist institution offering cradle to grave care with a worldwide reputation for excellence.

Once they have removed one specialist hospital then they will start on the next – The Marsden.

Every good wish
Victoria Borwick
A similar merger conceived in 1997 and called The Paddington Health Campus Scheme cost almost £15 million and took around 10 years to plan before it was firmly scrapped. All Royal Brompton specialist services would have been removed from Chelsea along with the complete disposal of the Royal Brompton Hospital.

The Paddington Health Campus Scheme fiasco would have lead to Royal Brompton hospital selling to commercial developers including the historic Fulham Wing building. It was opposed by local residents, patients, Imperial College London and Chelsea and Westminster.
The new merger of St Thomas’ with The Royal Brompton is in progress and a new location in Lambeth has already been agreed.
St Thomas' services will remain within its own vicinity, but the Royal Brompton's specialist services and its patients would have to move.

The Royal Brompton would be ranked lower than St Thomas' and there will be disruptions to job roles for staff of the Royal Brompton but those in favour of the new mega merger by St Thomas's Hospital say services will still be provided to those who need them, just not in Chelsea.

Brompton & Harefield will cease to exist as an independent foundation trust. The Royal Brompton's Fulham Wing patients have already been moved to the main Sydney Street Wing and all patient respiratory work has been moved away from the Fulham Wing, which is permanent.

The merger is set to take place but is strongly opposed by RBKC councillors, local residents, Imperial College London and Chelsea & Westminster Hospital.
Two petitions are currently available online to sign and add your voice to
stop the closure of The Royal Brompton Hospital:
SIGN PETITION 1
SIGN PETITION 2
I thank all campaigners and supporters wanting to
SAVE THE ROYAL BROMPTON HOSPITAL.
I support the Royal Borough of Kensington & Chelsea Council.
- Heinz Schumi 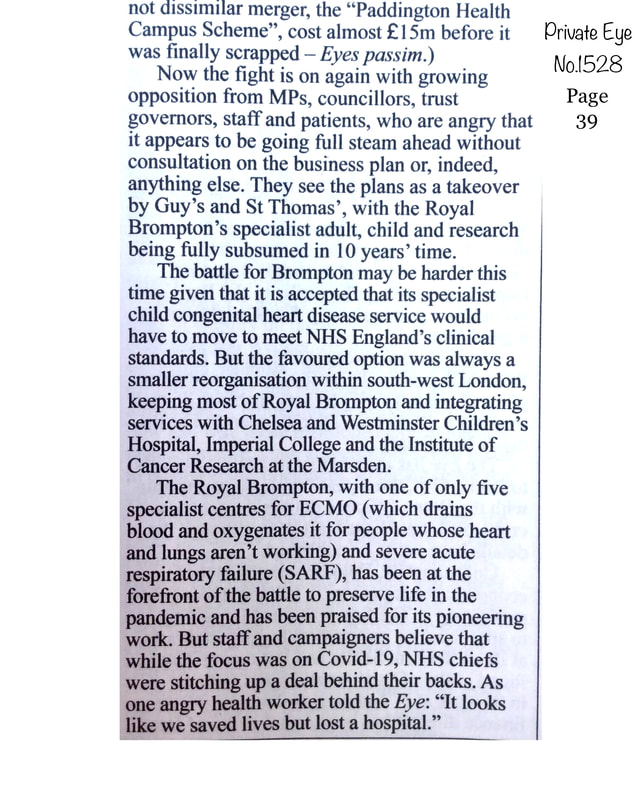